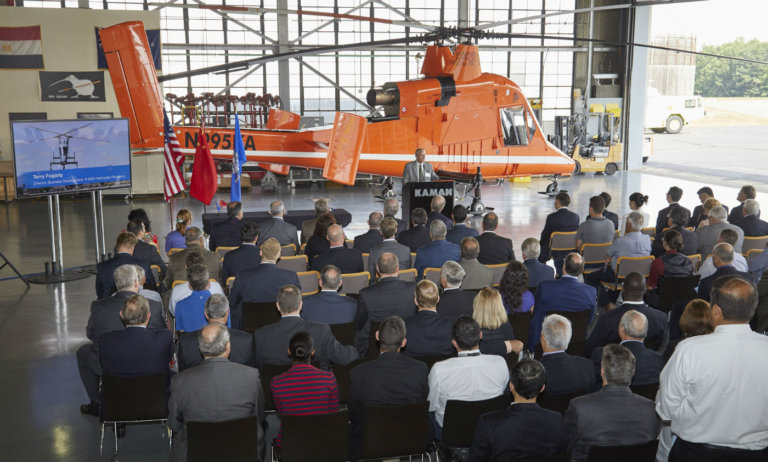 That aircraft, which represented the type’s entry into the Chinese market, was soon followed by another, with Lectern receiving the second new production K-MAX a few days later. The third is slated for Rotex Helicopter AG of Lichtenstein, which already operates two K-MAXs.

Development of the heavy-lift single-seat utility aircraft, with its distinctive slender design and intermeshing counter-rotating main rotor blades, was led by Kaman founder and former CEO Charles Kaman, and it received type certification from the Federal Aviation Administration (FAA) in 1994.

The manufacturer delivered 35 aircraft during its first production run, which ceased in 2003. But following renewed industry interest — and the hugely successful deployment of two unmanned K-MAX aircraft, developed with Lockheed Martin, in support of the U.S. Marine Corps in Afghanistan — Kaman announced it was restarting production of the aircraft.

That announcement, in 2015, was for an initial production run of 10 aircraft over 2017 and 2018, but it was subsequently extended to at least 2019 for an undisclosed number of aircraft.

“All of the interest in the K-MAX — meaning the serious interest — gave us enough confidence to extend the production,” Terry Fogarty, senior director of business development at K-MAX helicopter programs, told Vertical.

While Kaman has accepted deposits on more than the initial run of 10 aircraft, the company would not disclose how many beyond that run it intends to build.

“We have some internal goals that we need to meet to continue to add aircraft, but for all intents and purposes, we want to keep this line open for a very long time,” said Fogarty.

However, not all the initial run aircraft are spoken for, with a delivery slot available in 2017 and “some” slots available in 2018. “But we are very confident that those will be filled very quickly,” said Fogarty.

Production of the K-MAX is spread across several facilities, with Kaman’s Jacksonville, Florida, plant creating the airframe, and its facilities in Bloomfield, Connecticut, producing components and serving as the final assembly line.

Fogarty admitted that the initial rate of production was “fairly pedestrian,” but said the pace made sense for both Kaman and the market. He expects the process to speed up for future aircraft.

“The first aircraft was very heavily involved with the FAA,” said Fogarty. “What that means is we get to a certain point and then we wait for them to inspect, and they check our paperwork and check our quality systems, and I would suggest by the time we get to about aircraft five, we really get into a rhythm.”