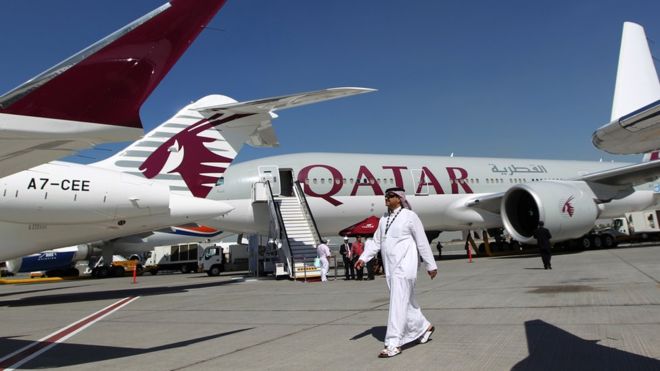 Four Arab states that have cut diplomatic and transport ties with Qatar said Monday that they have opened up air routes that Qatari planes can use in case of emergency.

The United Arab Emirates' foreign ministry said that nine corridors were being opened in coordination with the International Civil Aviation Organization, or ICAO. The official Saudi Press Agency issued a similar statement.

Qatar denied that any new routes had been made available, however.

In a statement citing its Ministry of Transport and Communications and the Qatar Civil Aviation Authority, it said no navigation announcements have been released outlining the new corridors.

The ministry and QCAA alleged that the anti-Qatar bloc was trying to "leak incorrect news" ahead of a meeting of the ICAO council on Monday.

The ICAO did not immediately respond to a request for comment.

The Emirati foreign ministry said the emergency routes include overseas areas managed by the UAE and one over the Mediterranean, managed by Egypt.

The UAE, Egypt, Saudi Arabia and Bahrain cut links with Qatar in early June over allegations it supports extremists. Qatar denies the charge.

The move forced state-backed Qatar Airways, one of the region's biggest airlines, to reroute many of its flights and scrap frequent routes to major regional destinations such as Dubai.